Occasionally Ralph strays from the musical path and dabbles in other arts related forms and on this occasion it's Hitting The Black Wall, a book of poetry by respected Louder Than War writer and fellow music blogger extraodinaire (under the nom-de-plume of Hiapop) Paul Scott-Bates.

Originally a Burnley Lad, he's now based in Lancashire's Rossendale Valley where he enjoys 'The Good Life' with his family.
This book though examines quite the opposite, delving at times almost painfully into the frailties of man's existence. There's longing, suffering and death alongside love, regret and malice. 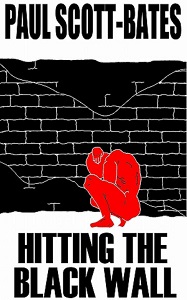